Richard Kerr the Kincora survivor, has now named Anthony Blunt as one of his abusers.

Full details can be read at this lnk, "The DUP Skeletons In Theresa May`s Closet."

Anthony Blunt can be seen and heard in the video below.

A very brave lady who tried to expose the Kincora scandal long before some of the culprits were prosecuted has just died.

She was called Valerie Shaw, she is in the video below. Valerie Shaw was probably quite unaware she was putting her life at risk when she attempted to expose this sordid affair.

Pr 29:6 In the transgression of an evil man there is a snare: but the righteous doth sing and rejoice.
Posted by SAM FLANAGAN at 10:41:00 pm No comments:

Providence has led me to discover a video clip, featuring one of the most obnoxious characters on the internet, sitting in judgement upon a Chess match disputed  by the two players.


It is titled "Two Mates Gone Stale," and it shows the highly obnoxious Tony Clifton!


I must point out for overseas readers, that Tony Clifton is a fictional character invented by the late Andy Kaufman.

Sadly, there are many people who still believe Tony Clifton is a real character.

Plus there are many people who still think Andy Kaufman is not really dead, he was such an outrageous character in real life, that is why people suspect he faked his own death?

Here is a sample of Tony Clifton at work!


There are many people who would think this was real life, if they were not warned about Andy Kaufman`s eccentric behaviour??

Ecclesiastes 3:1 To every thing there is a season, and a time to every purpose under the heaven:

9 What profit hath he that worketh in that wherein he laboureth?

10 I have seen the travail, which God hath given to the sons of men to be exercised in it.

11 He hath made every thing beautiful in his time: also he hath set the world in their heart, so that no man can find out the work that God maketh from the beginning to the end.
Posted by SAM FLANAGAN at 12:06:00 am No comments:

Last week I managed to obtain a very pleasing win against Fritz rated play with the white pieces, what made it most pleasing, was the fact it was based largely on intuition, rather than clear calculation.

Early in the game this position arose, I could instinctively see the potential Bxg6 sacrifice, then I noticed black may be able to play Rg8 and pin the bishop?

After a few seconds it was clear this does not work, as white can play Qxe6+. So I played Bxg6 and started my attack. 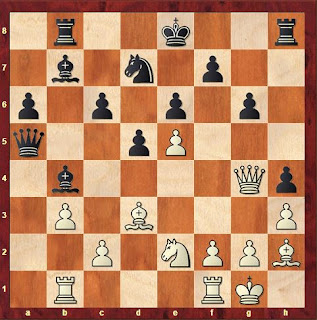 It became very difficult for me to calculate all the possible lines black could play after this tactical position was acheived.

Eventually the position below was reached, where it is white to play. Here I had to spend a bit of time working out what to do, though it may be easy to spot once you are shown the position as a tactical puzzle.

I played Rxd5+, it did not win the game instantly but an easily winning endgame soon occurred. 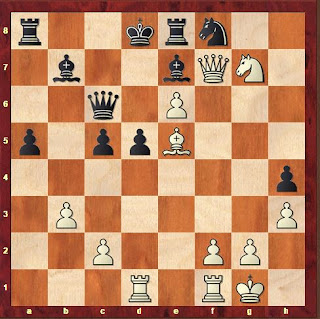 Ecclesiastes 12:12 And further, by these, my son, be admonished: of making many books there is no end; and much study is a weariness of the flesh.