White has just played Kh4. It is black to move, is it possible for black to win or draw?

It is not so simple if you have very little time left on the clock. 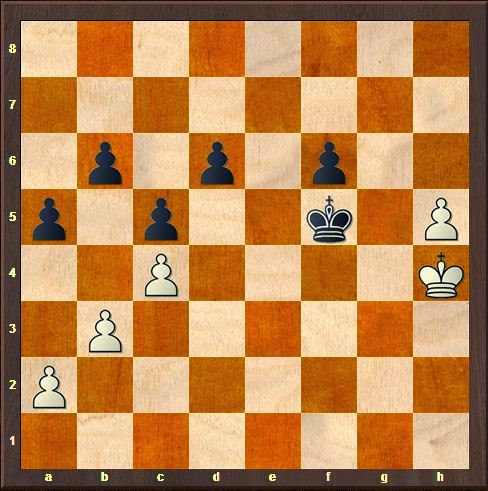 Rookies match report is below.

No-one, not even Paul Anderson, was “robbing Ruben” of his victory but that “pauls” into insignificance after what followed on the higher boards.

Ian “would field” a strong counter-attack against John ,caught in the “bryars” of a complicated position which he eventually lost.

While Captain Kelly was across the road watching Liverpool throw away a win , he heard the “tomtoms” sending a message that Bruce had lost to young Tom, leaving The A Team on the brink of defeat.

Kelly arrived back in time to see a “ray” of sunshine, as Ray won on Board One against Damien, a “cunning ham” if ever I saw one.

At 2-2, Sam was offered a draw by the other John but he said: “If it’s all the “sam” to you, I’ll play on a pawn down” and his bravery was rewarded by a late win to seal a match victory!

Disaster struck tonight at Ballynafeigh. South Belfast totally whitewashed and massacred!
Here is my game against Soren. The game score is not correct, it was a win for white.

Soren “Kid” Jensen was “soaring” after his win over Sam, who was “sore an’ “dejected after his defeat!

Board 3 saw Stephen “rush” to victory in his “David and Goliath” game, where Goliath (i.e. Stephen) turned the tables on David!

On Board 4, “jammy Jamison” just edged a win over dejected John, who had given his all !

The last game to finish, with seconds to go, involved Damien play 2..f5 against Martin’s Vienna Opening. It was a happy “omen for Damien” that Martin had not seen that line before, The first nine moves took nearly two hours to complete but “ D. Lavery’s delivery” was just that bit more rapid than Martin’s, whose flag fell (or was it mate?-answers on a postcard to….).

Overall, we salute the prospective League One Champions (on this form), but I’ve checked with my lawyer (no, not Michael Watters) and only we can call ourselves “The A Team”

As the Latin phrase goes, “per ardua ad astra” (through adversity to the stars)!
Martin Kelly (Captain)
Posted by SAM FLANAGAN at 11:39:00 pm No comments:

Tonight`s match against Bangor was a 4-1 win for South Belfast.

In the first game to finish, young Michael was not “sheerin” after his game with David, who found it as easy as “sheerin” sheep-Michael could not pull the “wool” over his eyes.

Then, Ray’s advantage in the opening “pauled” into insignificance at the end, resulting in an agreed draw.

Owen was “owing” his Bangor colleagues an explanation after he lost his opposite coloured Bishops ending to John.

Next, ”Walter Wilson wilted when wrung” out to dry by Sam.

In the last game, Gary defied the odds by drawing a tricky Knight and pawn ending, where neither side could risk moving their Kings from the centre of the board.

I think I heard the opposing team drive off afterwards in a couple of old “bangors”, but I may have got that wrong!

Martin Kelly(Captain, The A Team)

ECC 12:12  And further, by these, my son, be admonished: of making many books there is no end; and much study is a weariness of the flesh.
Posted by SAM FLANAGAN at 10:52:00 pm No comments:

THIS SHOULD BE AN INTERESTING SITE

Here is a link to a site which could turn out to be a very interesting blog. It is run by Gabor Horvath, who is a Hungarian presently living in Belfast.

Please have a look at it. He says it will be a journal about his quest for an IM title.