The match with QUB was drawn. It took place at the impressive Queen`s University venue.

With such a good Chess venue and the possibility of funding, it looks like Queen`s Chess Club have a potentially very promising future.

Here is a short video taken at the venue just before the games started, did not get much video footage as my game was the last to finish.

What names to conjure with - how to make puns with those names?

I had to " burn hard" the midnight oil to think of one for the draw between the 2 Bernard's!

In this "column", Calum's defeat against unbeaten Ray could not be omitted, however " callous" that might be!

As for Fozooni's victory over previously unbeaten John, "fools only" rush in where angels fear to tread!

The chances of a positive result on Board 3 rather than a draw were " ngoing, ngoing, Ngieng "!

Before the match, I wondered if QUB 1 " would field" Woodfield but they did and his draw with Sam tied the match.

Names in the Bible are very interesting, they all signify something, like NABAL for instance.

1 Samuel 25:25 Let not my lord, I pray thee, regard this man of Belial, even Nabal: for as his name is, so is he; Nabal is his name, and folly is with him: but I thine handmaid saw not the young men of my lord, whom thou didst send.
Posted by SAM FLANAGAN at 7:48:00 pm No comments:

The match between Belfast South and the Lions was drawn. 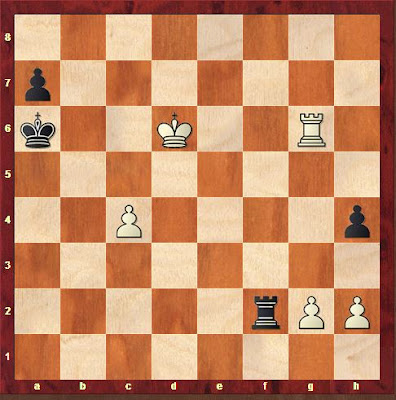 Here is a postion from my game against Ross Harris. I am white and I have just played Kc6 to Kd6, unwittingly giving away a lot of my advantage, according to my computer programme.

Is it possible for black to draw this game? It is quite difficult when you only have a few minutes but it may still be possible.

C S. Lewis teams - Have you seen their wardrobe? Not up to our sartorial elegance, but the Lions were, in the mane, worth the draw!

On Board 4, John made a kamikaze move, which samurai Sam Moore, I believe, exploited to win.

Ray D. was ready to resign, but played a peach of a move against Leitch to win his queen- life's a bitch!
Next, Gould fooled Bernard into thinking he would win on time; alas Richard hung on to win. Finally,

Luke 14:31 Or what king, going to make war against another king, sitteth not down first, and consulteth whether he be able with ten thousand to meet him that cometh against him with twenty thousand?

32 Or else, while the other is yet a great way off, he sendeth an ambassage, and desireth conditions of peace.
Posted by SAM FLANAGAN at 11:26:00 pm 4 comments:

Below is an interesting endgame position from my game against Nicholas.  It is white to play, what is the best way to continue? I did not see it during the game. 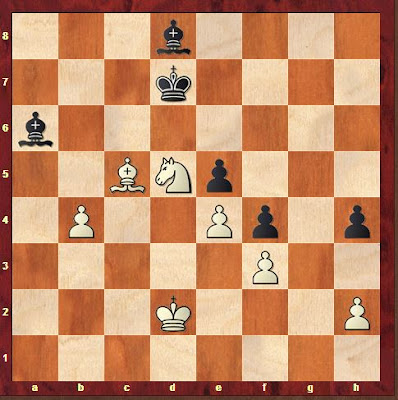 Rookies report is below.

I've mulled over this game- we're down but not out!
We're now second in Division 1.

After an hour, we were 2-0 down.
First, Dan the Man had a plan which beat John.

Then, I hoped Bruce would cruise to victory, given his great start to the season- so I hoped Steve wood lose but he won.

Des was in a daze as Chris was not amiss at forcing Des to offer a draw.

Ray's played so well so far that I was hopeful in his game against Annesley- and slay him, he did.

Sam, a pawn up, needed a win to secure a match draw, but Nick managed to Nick a draw to win the match 3-2.

Joel 3:14 Multitudes, multitudes in the valley of decision: