After 2 encouraging results against Ballynafeigh 2 and Muldoon’s 1, we fell down to earth with an almighty bump last night against a team we previously beat 5.5-1.5 !

It was a case of “the moore, the merrier” for Sam on Board 5 as William “The Conqueror” failed to live up to his nickname!

Gabor was “hungary” for victory against Ray, who made a “clerical” error to lose the game!

On Board 3, Sam as vice-captain was forced to put a nought in the results “calum” after his defeat!

‘Fred to say John on Board 4 was unable to draw with MacDonald, as he had done before, as the latter withstood deep time trouble to clinch a win!

I was expecting a “loss from Ross” in the last game but he came up, smelling of “rosses” to complete the whitewash!

Oh well, as the song goes, “the only way is up” and at least The A Team gets a long Christmas break to recharge their batteries.

In the meantime, if Siebren, Stephen and Graeme are ready, willing and able to start playing again for us in the New Year, I’d be very happy to hear from you!

Don’t forget the Christmas Quiz and social evening at the club on Monday, 22/12/14 at 8pm-if I don’t see you there, Merry Christmas and a Happy New Year !

Muldoons A versus Belfast South A chess match ended in a draw. My game with Des Moreland ended in a very exciting draw, we were both running out of time. 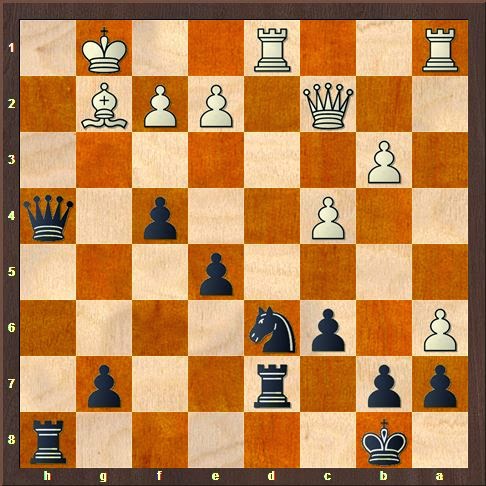 I was black, it is black to move. Whenever you fail to play the most promising continuation, you end up with a draw instead of a win.

After losing 6-1 to Muldoon’s last time, we played above our rankings to draw this match.

First, Ray got into a “pickle” against  Pilkiewicz  in the opening and fell for a brilliant Rook sac against his Bishop.

Then, Las Vegas bound Danny “neve- ad- a” chance and saw his luck “desert” him against John, who had an outstanding draw.(Nevada-get it?). So, I’ll not be send a “Dear John” letter to John after this game.

The next game saw Bruce “spruce” up his technique to draw with Stephen, who was in massive time trouble.

On bottom board, John couldn’t see the “woods” for the trees, as Bernie “The Bolt” landed his “golden shot” to win the game.