Photographs can be very interesting don`t you think? 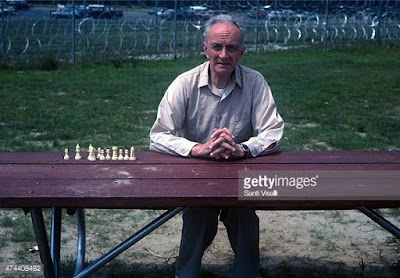 Discovered this photo a few days ago. It was taken in 1982 and it features a man called Michelle Sindona.

The picture was taken in prison, and it look very like Sindona is sending a message to his former colleagues, that he is willing to play "the Cyanide Gambit," in order to escape from his predicament.

"The Cyanide Gambit," is unlike other gambits were you are willing to sacrifice a pawn or a piece.

To play "the Cyanide Gambit" you have to be willing to sacrifice all the pawns, and all the pieces in order to win!

Naturally this would lead to quite a spectacle, and would need superhuman powers of calculation for it to work successfully.

In 1986, Sindona`s game went this way. He made the astounding threat to his former colleagues, that if he was not immediately released from prison, he would publicly reveal the secret financial links between the Mafia and the Vatican.

The gambit did not go the way Sindona expected, a few days after making the threat, he was given a cup of coffee containing cyanide, and it was game, set, and match in the favour of the Vatican and the Mafia.

No one has ever tried to play "the Cyanide Gambit" ever since!

Maybe Gary Kasparov will attempt to play it someday against Vladimir Putin?

If only Michelle Sindona had been able to sharpen his calculating skills a bit more, he may have won?


You can read about Sindona in this book, titled "The Entity," plus many other Internet sources. 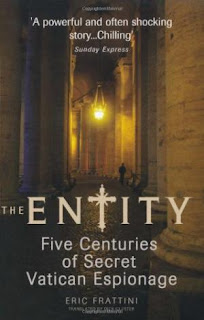 Acts 4:29 And now, Lord, behold their threatenings: and grant unto thy servants, that with all boldness they may speak thy word,

30 By stretching forth thine hand to heal; and that signs and wonders may be done by the name of thy holy child Jesus.

CHESS SCENE FROM "THE DOGS OF WAR"


Noticed a chess scene from a movie based on the book, "The Dogs Of War."

The guy actually starts to play one of the sensory chess machines which used to be really popular.

Cannot be certain which model of machine it was, could have been something like a Novag.

Novag and Fidelity used to bring out some great chess machines. 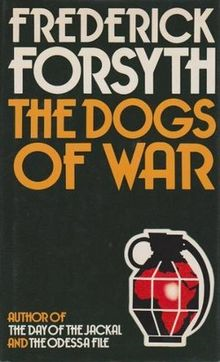 War is a very, very dangerous business, it is not to be undertaken lightly.

The words from this music is about going out to war. They are singing from Deuteronomy 20.

Deuteronomy 20:1 When thou goest out to battle against thine enemies, and seest horses, and chariots, and a people more than thou, be not afraid of them: for the LORD thy God is with thee, which brought thee up out of the land of Egypt.
2 And it shall be, when ye are come nigh unto the battle, that the priest shall approach and speak unto the people,

3 And shall say unto them, Hear, O Israel, ye approach this day unto battle against your enemies: let not your hearts faint, fear not, and do not tremble, neither be ye terrified because of them;

4 For the LORD your God is he that goeth with you, to fight for you against your enemies, to save you.
Posted by SAM FLANAGAN at 9:24:00 pm No comments:

WHO WILL BE THE FIRST UCU PLAYER TO PLAY THIS?

Noticed a new DVD by Andrew Martin being publicised, I wonder who will be the first UCU player to play it?

It will not be me, that is for sure, I am having serious trouble trying to remember the lines I try to play at the present, trying to learn anything new, is totally out of the question.

I am sure some one will give it a go though?

Ecc 12:12 And further, by these, my son, be admonished: of making many books there is no end; and much study is a weariness of the flesh.
Posted by SAM FLANAGAN at 6:50:00 pm No comments:

The last 2 games to finish provided an exciting ending and was well played by all four players.

Ecc 12:12 And further, by these, my son, be admonished: of making many books there is no end; and much study is a weariness of the flesh.
Posted by SAM FLANAGAN at 2:33:00 pm No comments: