Saw this picture on a Twitter feed.  It was posted by Chessbase India.  The picture was taken before game 10. 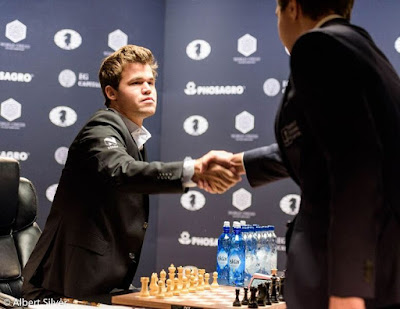 The way the picture is taken, makes it look like Magnus Carlsen is diminishing in stature and Sergei  Karjakin  is growing in stature.
It is very clever.

1 Samuel 16:7
But the Lord said unto Samuel, Look not on his countenance, or on the height of his stature; because I have refused him: for the Lord seeth not as man seeth; for man looketh on the outward appearance, but the Lord looketh on the heart.
Posted by SAM FLANAGAN at 8:16:00 pm No comments:

QUEENS versus BELFAST SOUTH A

Just saw the final score of last night`s match posted on the UCU site. It was a 4-0 win for Queens.
Posted by SAM FLANAGAN at 12:32:00 pm No comments:

Rookie`s report on the match is below.

Things go from Bankers' to Bonkers.

All looked to be going well for us after 2 rounds of shadow boxing but the gloves came off as things went " bonkers at the Bankers' ", as we lost the last 3 games!

Unusually, Sam was first to finish - Sam was in a "jam but kept calm until he had a draw in his palm"!

John Bryars "enspires" , as he made a "dent on" Fenton's chess record to give us the lead!

In the battle of the Bobbies, our Bobby made a few "boobies" and his loss tied the match so far!

"Pavlov's dogged" determination gave them a "lead" as Ray "tailed" off to defeat!

Bruce had a "bruising" defeat to "Nial the 'Niallator", as Troughton "trod on" our chances of a drawn match!

Remember our Mondaytournament starts next Monday, 7/11/16, at the Bankers' Club, Malone Road, around 7.30 pm.

Fees due are £25 for Monday tournament; £30 for club league players; and only £40 for playing in both.

BEST EVER PICTURE OF A CHESS PLAYER?

There must be countless numbers of images of chess players on line.  Pictures of people deep in thought seem to have some sort of compelling appeal.

Here is the best ever picture of a chess player in my opinion. I don`t think this will ever be bettered. 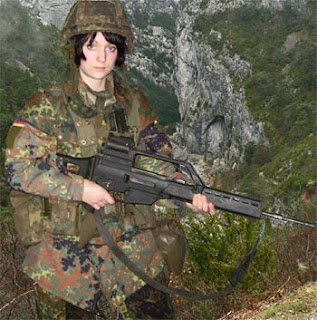 Don`t know who took the photo but it is from this article.

Ecc 12:12 And further, by these, my son, be admonished: of making many books there is no end; and much study is a weariness of the flesh.