I have now added some Hillbilly music to this post about The Hillbilly Attack. A famous Hillbilly song which captures the spirit of real Hillbillies.

Well known English GM Simon Williams posted a most amazing video on the Chess.com website yesterday. It examines an attacking system for the white player and it just happens to be called “The Hillbilly Attack.”

To be honest, I have never heard of this attack before and initially thought Simon Williams was making a joke, it turns out he was serious and “The Hillbilly Attack” really does exist.


Below is a Wikipedia description of the word “Hillbilly.” 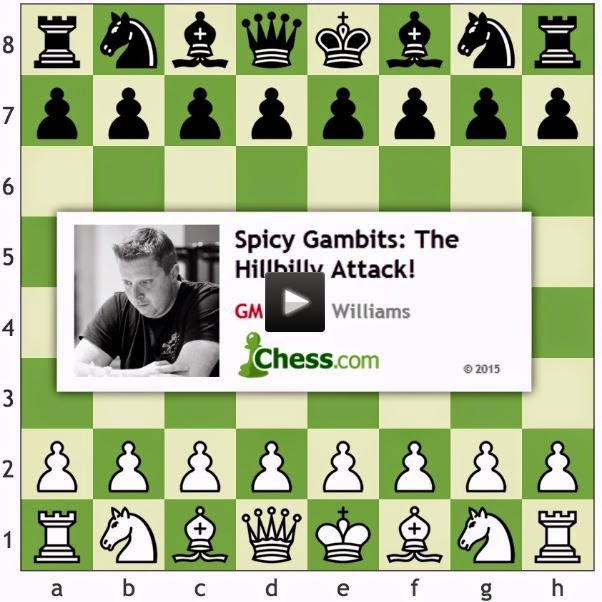 Hillbilly is a term (often derogatory) for people who dwell in rural, mountainous areas in the United States, primarily in Appalachia, but also parts of the Ozarks. Due to its strongly stereotypical connotations, the term can be offensive to those Americans of Appalachian or Ozark heritage.

“Hillbilly” first appeared in print in a 1900 New York Journal article, with the definition: “a Hill-Billie is a free and untrammeled white citizen of Alabama, who lives in the hills, has no means to speak of, dresses as he can, talks as he pleases, drinks whiskey when he gets it, and fires off his revolver as the fancy takes him.”

The stereotype is two-fold in that it incorporates both positive and negative traits: “Hillbillies” are often considered independent and self-reliant individuals that resist the modernization of society, but at the same time they are also defined as backward, violent, and uncivilized.

An enterprising character like Nelson or one of his cronies could easily hi-jack and re-invent “The Hillbilly Attack” by re-naming it as “The Ulster-Scots Attack” or perhaps “The Scots-Irish Attack.”

They could then establish a new Chess Club giving it the name “The Ulster-Scots Chess Club” or “The Scots-Irish Chess Club.” Such a venture must easily be good for funding if about £200,000 per year don`t you think?

It is much too good an opportunity to miss, I must send this article to the Ulster-Scots Agency, no doubt they will set the wheels in motion to get the whole enterprise of the ground ASAP.

It would be a great appropriate position for Nelson`s sidekick/ Special Advisor Stephen Brimstone. Stephen is just the man to lead a new “Ulster-Scots Chess Club,” anyone with a phenomenal memory like Stephen is bound to be a great chess player. His incredible “Magnus Carlsen like memory” is a wonder to behold.

This article may sound outrageous, HOWEVER if you look a the recent list detailing all the mass-murderers, perverts and other gangster type groups receiving substantial funding, you will soon come to the conclusion this article is quite sensible.

Here is one link detailing many “projects” receiving funding.

Here is another link of many other projects receiving funding.

Here is Stephen “I can`t recall” Brimstone being grilled by Jim Allister.

Proverbs 19: 20 Hear counsel, and receive instruction, that thou mayest be wise in thy latter end.

21 There are many devices in a man’s heart; nevertheless the counsel of the Lord, that shall stand.
Posted by SAM FLANAGAN at 4:35:00 pm